So I know that Monday night’s post was a bit alarming for a few friends – sorry ’bout that. Like I said, I’m hopelessly transparent, and that extends to my writing. Things have been much better since yesterday; sometimes I guess I just need to let off steam. And famdambily stuff tends to be stressful, overshadowing what has been arguably the most fantastic part of this trip to Arkansas:

I wash it, I run a comb haphazardly through it, and then it somehow dries naturally into soft, shiny, well-shaped layered perfection. ‘Tis truly a wonder, and compensates admirably for some of the less-fun aspects of a Southern vacation, including humidity (like, WHOA) and trips to Wal-Mart. I pray that my hair shall continue to behave so beautifully upon my return to my belovéd home.

So I have a characteristic that’s alternately a strength and a failing: I’m hopelessly transparent. If I’m happy, everyone knows; if I’m angry, everyone knows that too (though I’m more a sullen than stormy type). I find it absolutely impossible to conceal my feelings, and if I’m angry at someone, I cannot be nice to that person. While this does prevent me from being a back-stabber, it also makes for very tense situations when I’m forced to deal with someone I don’t like.

Fortunately, I’m rarely in these situations; mine is a fairly sheltered and even blissful existence, relationship-wise. My roommates and close friends are wonderful and bring out the best in me. But, unfortunately, there are also people who bring out the absolute worst in me. I really don’t like who I am around them, and I don’t want to be who I become, but I just can’t seem to be anything but a venomous shrew. This emotional tug-of-war only renders me even more tense and less able to reign in the hateful tendencies that are revealed during these times. (Like C. S. Lewis’s cellar rats, these tendencies appear to be gone, sometimes for a long time, only to reappear at sudden and inopportune moments.)

The worst of these tendencies, I think, is the desire to retain them – even while I stand outside myself appalled at the things I’m saying or thinking, part of me is absolutely reveling in the negative feelings I’m experiencing. Part of me doesn’t want to work things out and be calm and mature; part of me wants to fight and rage and shred and tear and seethe until the person I’m angry at is devastated. This part of me sits and broods and thinks of the most malicious things I could say to inflict the most damage possible. So although I wrote a few minutes ago that I don’t want to be who I become, a more accurate assessment is that I do want to be exactly that person, at least until I’ve won. Not admirable, this quality.

So of course there’s a reason these things have been on my mind today; I would say I’m trying not to be angry, but really I’m trying to want not to be angry. I really don’t want God to take the anger away until after I’ve had a chance to unload. And although the voice of reason and rationality and harmony preservation has been hinting on occasion that I should be enough of an adult to just let the subject go, that cellar-rat part of me jumps in with a furious “But why should I have to be the mature one here? Why doesn’t this other person have to be a mature adult? Why do I have to control my temper?” Sure, an eye for an eye leaves the whole world blind – but why do I have to be the one who relents?

Grrr, and sigh. We’ll have to see how the next few days go; perhaps some kind of compromise can be reached. But as both concerned parties are stubborn as all get out, things may look more promising for Israel and Palestine.

To answer D?M’s question about my last post – to wit, how the non-aggressive driving is going – I have to say that it’s very fortunate that I made the decision to cool me little jets last week, as I spent eleven hours Tuesday and six hours yesterday driving on interstates between Boston and Little Rock. (The rest of the time I wasn’t driving, just passengering.) I only did two very minor aggressive things in those seventeen hours, so I’m quite proud of myself.

It’s also a good thing that I made this decision/declaration last week, as Arkansas drivers are rather different from Boston drivers, and I’ve become unaccustomed to the more relaxed pace of the South… 🙂

All right, there’s something I’ve been meaning to do for a long time now. TTJ even mentioned it the last time I gave him a ride somewhere, saying that he thought I had made a resolution to do it sometime in the past. But I’ve avoided making a formal announcement because I didn’t want to be held accountable.

A few days ago, I realized that if I were on a date and the guy was driving the way I do (weaving in and out of traffic [sometimes leaving only inches to spare], cutting people off, tailgating, flashing my lights, internally swearing, tapping my brakes when someone is tailgating me just to piss them off [it works]), I would think he had some SERIOUS anger management issues and be completely repulsed.

And I would be right. About the anger management issues, anyway. I’ve noticed before that my default reaction to almost any event is to become irritated (or even enraged), and I have a furious need for everyone to not only pay attention to me but also acknowledge my superiority in whatever activity we’re engaged in (something that is not possible if we are candlepin bowling, because BOY do I suck). And I am always in a hurry – I want things done MY way, NOW. But why*? Does it really matter if I arrive somewhere 30 seconds later? And does it really matter if someone puts the apples on a different shelf?

Of course not. And it’s a lot less stressful to be calm and in control than furious and out of it. I’m trying to drain the anger out of my life; although the aggressive driving is just a symptom of the problem, at least this is one concrete way I can work on overcoming it.

*I actually know the answers to the “why” questions; they’re in my offline journal, where nobody but me can read them. 🙂

Wow. I wonder who these guys think will win the Democratic nomination?

Obama, only weeks away from clinching the nomination, has already turned his focus in tone and itinerary to Republican John McCain almost to the exclusion of his fading Democratic rival…

The New York senator campaigned, though, like it mattered and polls showed her with a commanding lead in the Mountain State, as well as an advantage in Kentucky a week later.

(This is not meant to endorse any particular candidate nor even reveal my opinion about Obama or Clinton. I was just shocked to see a phrase like that in a professional news article; it seems more suited to a casual conversation.)

In other (good) (and entirely unrelated) news, I was told that I look like a German today. Given what I saw of German fashion when I was in Augsburg last summer, that could be a backhanded compliment. But as a card-carrying Europhile I’ll take what I can get. I’m especially pleased because I managed to put together the stylish ensemble I was wearing without the help or even knowledge of my fashion genius roommate, whose enthusiastic approval I gratefully received later. So I got dressed all by myself today. Go me!

So last week I took my first trip ever to the Cape* (yes, I’ve been in Boston almost six years and still hadn’t visited), courtesy of my sugar momma roommate’s job. Lying on the beach was wonderful, as was the adorable little library with the small-town-friendly librarian where I worked while I was there (I can’t lie on the beach ALL the time), but my favorite part was the fantastic surprise that J_H had in store for me. I made sure not to look at the directions as we drove through a couple of quaint little towns, and it wasn’t until we pulled into the driveway/parking lot that I saw the sign for…

My roommate loves me.

And I love her.

And I love the Gashlycrumb Tinies, whose fates are indicated throughout the house by a box of tacks here, a bottle of lye there, a peach (with just one bite missing) in the kitchen…

And I love the Doubtful Guest, as you can see: 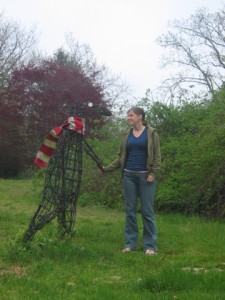 So I have several things to write about today, including a fantastic surprise that my belovéd roommate J_H gave me this afternoon (hint: “F” is for Fishies, who died of delight) (158 bonus points to anyone who recognizes that allusion), but as I have limited time I shall stick with the most important thing: The fundraiser tomorrow night for HumanityCorps, a charity that my belovéd roommate C-t-P started a few years ago. See below for details. Those in the Boston area, I hope to see you tomorrow night! 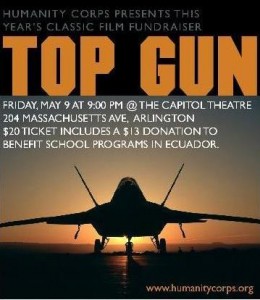 Just wanted to elaborate a little more on Tuesday’s post – I don’t think that British or European children’s literature is inherently more sincere or more intellectual or more anything than American children’s literature. I just remember thinking when I saw the fifth Harry Potter film, read the seventh Harry Potter book, and saw the Narnia preview that those were some really dangerous situations for children; my initial reaction was “Whoa. They’d never have kids do that in an American movie or in an American book.” But again, I may be wrong about that. Although I read voraciously as a child (and still do), I haven’t been exposed to children’s literature for about two decades.

Watching the preview for Narnia a few nights ago I was struck again by differences between British/European and American children’s literature. In the Narnia and Harry Potter books, and even in the Lord of the Rings series (if I remember correctly, Merry and Pippin are younger than Frodo and thus still in their “tweens”), children find themselves in or willingly enter situations that are very palpably dangerous; these seemingly ordinary young men and women fight against tremendous odds in situations where the risk of death or injury is real and the opponents aren’t just bullies or angry principals but menacing representations of ultimate evil. I can’t think of comparable situations involving children in American books, though I have to admit it’s been a long, long time since I’ve read any children’s or young adult fiction (except for The Phantom Tollbooth, which I finally read this year). I think I would be at least surprised if not somewhat unnerved to find children in real life-threatening situations in American literature – unnerved not because I think it’s wrong for an author to create these situations for young characters, but just because it seems to be unprecedented in American literature.

But I could be wrong about that. Not all American children’s literature is as benign as the Babysitter’s Club books, and the Baudelaire children in Lemony Snicket’s Series of Unfortunate Events see relatives and friends die and frequently find themselves in real peril. I still think this is unusual, though, and remember feeling vaguely disoriented when I first read The Bad Beginning. Moreover, the children in the British books fight in adult wars steeped in earnest sincerity and grim determination; they’re actively engaged in a cause, not trying to escape from demented relatives.

This is not to say that I think one style is inherently better than the other, or that I even prefer one style over the other. I don’t. I just think it’s interesting that the two literary traditions seem to be so different.