This is me on Friday night, all dressed up and ready to go (it was about 25°F/-4°C, so, no, the Stay Puft Marshmallow Coat was not at all overkill): 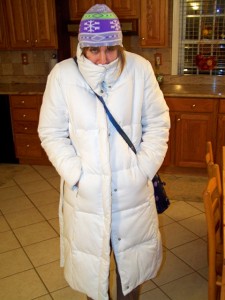 Usually I am both. Sometimes I am neither.

Just over a year ago our bishop encouraged us to track our expenses for a month. Finally, this September, I started doing it. September and October were both great – I found that when I tracked my expenses I spent less, and I have to admit I was feeling a wee bit smug at my mad budgeting and saving skillz.

But then November hit, and all the shtuff (necessities, really) I was so proud of myself for not buying during September and October has had to become part of this month’s budget. If I average the three months together, I’ll probably have a much more realistic picture of what I normally spend.

So some of you will remember that in September I was besieged by allergies that glued my eyes shut every morning and introduced me to life in the Land of Misery. Well, last week I had a real scratch test done; basically, I’m very allergic to pollen in the spring, grass in the summer, weeds in the winter, and dust mites, cats, and dogs all year. (I’m mildly allergic to all sorts of other stuff as well – though corn smut, unfortunately, does not make the list, which is a little disappointing because it would be wicked fun to say I’m allergic to smut.)

So I get to buy special allergen-proof bedding (since I learned about dust mites, the thought of sleeping in my un-proofed bed has been kind of revolting). The good news is that I’m eligible for allergy shots. Allergy shots are wonderfully effective and make allergies virtually disappear.

I rearranged my room a few days ago (thanks to JRS for saving me from myself, as I was trying to do the impossible all on my own [as usual]) and now the feng shui is much better. However, the quintessentially New England floor under and around my desk is very uneven. So now my chair, which has wheels, has a tendency to roooooolllllll… … …

I’m wearing a thermal shirt, a wool sweater, jeans, socks, a for-real-outdoorsy-people lined hat, and a fleece scarf, and I’m still both a) cold and b) too cheap to turn up the heat even though it’s 33° outside.

I found out Saturday night via my mother’s Facebook status that I’m (finally) going to have a chance to spoil rotten a niece or nephew! I’ve been jealous of friends with nieces and nephews for years. Now I get one too!

I owe my sister a post – she tagged me a couple of weeks ago. I’m to list 10 odd things about meself. Of course, that shouldn’t prove difficult a-tall, but I’m actually having a little trouble coming up with things that are within the acceptable spectrum of odd for individuals outside of an institution.

So this is the view from one of my bedroom windows: 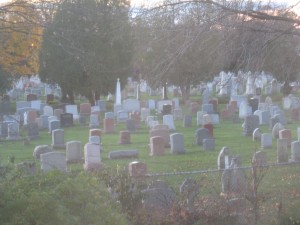 Ordinarily this doesn’t bother me a-tall – except for one time last week when I’d been listening to a creepy story and then I took a nap in the afternoon. I woke up disoriented in the weird afternoon not-quite-twilight*, caught a glimpse out my window, and immediately remembered why I don’t listen to or watch creepy stories at any time of the day or night.** I also wondered, again, why some people say they enjoy being scared – how, exactly, is being freaked out fun?

My assignment, as I’ve chosen to accept it:

Precursor: It’s understood that family and friends are valued, so use values that would follow those.

My relationship with my Father in Heaven. I was too afraid of Him to have one for many, many years – not because of any other person or institution, but because, well, I just was. Learning that He actually does like me has made me something I never thought I could be: Happy.

The gospel. All of it, but especially the “Love thy neighbor” and “Do unto others as you would have them do unto you” parts.

Health/physical fitness. I don’t ever want to be unable to do what I want to do – especially everyday activities – and I try to be conscientious about the potential long-term effects of the choices I make each day, especially with eating and exercise habits.

Expressions of affection. They’re what make the world go ’round. Spontaneous, verbal, and/or written (including e-mailed) expressions are particularly valuable, as are comments left on weblogs…

Consideration of/for others. Especially as expressed through punctuality, quiet activities when others are sleeping, and parking in only one space (people who park inconsiderately here in Cambridge are guaranteed a special place in hell).

Sleep. I need nine solid hours per night – more sometimes. ‘Tis embarrassing in a culture wherein respect is inversely proportional to amount of sleep required, but if I don’t get at least eight hours I really can’t function.

Education. Specifically, the ability to count.

Six things I do not value:

Bitterness. Obama won. The world didn’t end and America isn’t going to cease to exist. Get over it and stop posting politically charged Facebook statuses.

Stubbornness. (Yes, I can smell the hypocrisy…) It doesn’t occur to some people that they could be wrong, which is kind of unfathomable to me because my initial reaction when faced with evidence of any nature is always a flash (not infrequently a full-on hurricane) of self-doubt.

Complacency. Not everyone has to save the world, but I think continuous self- and community-improvement efforts are important.

Do I even have six regular readers who also have weblogs? Um, J_H, KMW, DM, KLPH, NLG, JNP. (If you think those might be your initials, they probably are.)

A friend just sent me some instructions that you should follow too:

The blue one with the blue-and-white checkerboard top?

The building in the background is the Cambridge LDS chapel (where I go to church).