Note: It wasn’t lost! WordPress didn’t score any points off me after all! Huzzah!

Challenge #1: The taxi driver. He wanted 800 rubles ($24) more than he was supposed to charge because he’d had to wait for an hour at the airport. I told him that that was not my fault – he knew we were on an international flight and that meant we would have to go through customs and passport control, and he should have checked the flight status before he headed out to the airport. Fishies: 1, Moscow: 0.

Challenge #2: Getting home after the Bolshoi Opera. Long story short: My friends and I got separated and I (very unusually for me) had neither map nor phrasebook, so I ended up taking a 90-minute walk through central Moscow, relying on text messages from a disconcertingly-close-to-dead cell phone. I finally made it back to the well-hidden hostel at 12:30 AM after lots of backtracking and multiple fruitless conversations with non-English speakers. Lots of praying occurred, as did some audible conversation with God. Fishies: 2, Moscow: 0.

Challenge #3: The metro. In Boston, New York, Paris, London, and pretty much every other civilized city in the world, if you stick your arm through the doors as they’re about to close, the doors open again. In Moscow the take-no-prisoners doors slam shut right on your wrist, prompting gasps of alarm from onlookers who quickly help you force the doors apart (no small feat, this) and dash onto the train right before it takes off, thus preventing another potentially disastrous separation from friends. Fishies: 3, Moscow: 0. (Though I do have a bruise.)

Note: I may have to amend my scorecard tomorrow if the weather doesn’t improve.

And finally, a few pictures from today (note the white stuff that looks suspiciously like snow in the picture of us outside Lenin’s tomb). Enjoy… 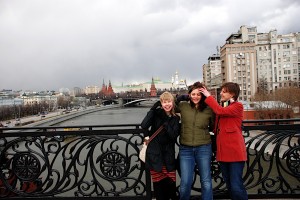 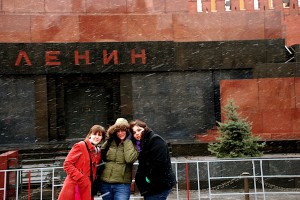 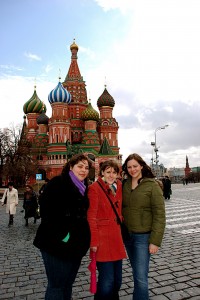 I just wrote a nice post describing the way Moscow has tried in vain to vanquish me, but WordPress ate it. I seem to have met my match – in software, at least. Russia will have to keep trying.

And very tired. Some fortunate people have the enviable ability to sleep on planes; some unfortunate Fishies do not, even if the flight + delays last 11+ hours. But it’s a lovely day here in Moscow and I’m headed to the Bolshoi opera tonight!

So I had been planning to write about the Fishie-san lesson for a few days but hadn’t gotten around to it, when yesterday evening I received a round TUIT in an unexpected form. Microsoft has decided to outsource the editing that Entirenet has done for the past 10 years to China – which means I’ll have a job for one or two more months, but that’s it.

For once, I’m completely not freaked out. For the past few months I’ve had a strong feeling and have been counseled in a priesthood blessing that I don’t need to worry about my job or financial situation; I just wasn’t sure if that meant that I would keep my current job or that things would work out just fine even if I became a casualty of the economy. So now I know which one it is, lo cual me hace feliz. I’ve also been half-expecting this to happen for over a year, so the announcement, while a surprise in some respects, has left me with a feeling of relief rather than shock or stress. The shoe has dropped. And I’m OK.

One reason I’m not afraid is that free-lance editing jobs have been coming to me spontaneously for the past couple of years without any effort whatsoever of mine – I’ve done work for a company in Seattle, I’m about to start editing a friend’s doctoral thesis, and another friend has asked me to edit Web site text for her company. I spoke with an HBS professor (and emeritus General Authority) today, and he had a couple of good suggestions. A quick Google search yesterday turned up several websites of organizations who offer exactly the kind of editing services I can provide. And there will always be demand for help with master’s theses and essay applications.

So I feel like my next steps are to further investigate options and work on marketing. I have several ideas already and really feel like God is guiding me in this process. I honestly never thought I would be an entrepreneur – when I learned about them in eighth grade I wondered who would ever want to do something like that?! – but it seems God has had other plans in mind for me. I can see very clearly ways in which He has been preparing me for this situation over the past couple of years.

So, that’s it. I want to thank all of you for being such good friends (and/or relatives). I really value your love and support and hope that I can return to your life some of the blessings you’ve added to mine.

And: One really nice thing about this situation: I won’t have to carry around this 17-inch, 8-pound beast of a “laptop” anymore! I’m SO in the market for a tiny little netbook.

So a lot of the time when I set a goal I think I know exactly what I need to do to accomplish it. So I determine a course of action and then begin pursuing it, full steam ahead, doing everything according to my careful plan… And I get nowhere.

Then I ask God what I should do, and He gives me answers that make me wonder if He was even listening to me – the instructions seem utterly disconnected from my goal. Wax on, wax off. I try to follow directions but frequently feel resentful and wonder why I’m being told to paint the fence instead of jump right into breaking boards with my mad karate skillz. Thanks for nuthin’, Mr. Miyagi.

And then an existential shift happens and I see that these seemingly random things were leading me in the correct direction all along, with shortcuts that I didn’t know about, and that the way I had planned to go would have taken me far, far away from my goal. Turns out my human vision is limited. And that God’s imagination is way cooler than mine.

I subscribe to the Delancey Place mailing list, which sends excerpts of various literary works to my Inbox every weekday. Sometimes the excerpts are particularly interesting. Here’s one:

In today’s excerpt–organic, as it is used on food labels, while it still means chemical-pesticide-free, doesn’t mean quite what it used to. And then there’s the so-called free range chicken:

“Shopping at Whole Foods is a literary experience. That’s not to take anything away from the food, which is generally of high quality, much of it ‘certified organic’ or ‘humanely raised’ or ‘free range.’ But right there, that’s the point: It’s the evocative prose as much as anything else that makes this food really special. …

“With the growth of organics and mounting concerns about the wholesomeness of industrial food, … it is Whole Foods that consistently offers the most cutting-edge grocery ‘lit.’ On a recent visit I filled my shopping cart with eggs ‘from cage-free vegetarian hens,’ milk from cows that live ‘free from unnecessary fear and distress,’ wild salmon caught by Native Americans in Yakutat, Alaska (population 833), and heirloom tomatoes from Capay Farm (S4.99 a pound), ‘one of the early pioneers of the organic movement.’ The organic broiler I picked up even had a name: Rosie, who turned out to be a ‘sustainably farmed’ ‘free-range chicken’ from Petaluma Poultry. …

“The organic movement, as it was once called, has come a remarkably long way in the last thirty years, to the point where it now looks considerably less like a movement than a big business. Lining the walls above the sumptuously stocked produce section in my Whole Foods are full-color photographs of local organic farmers accompanied by text blocks setting forth their farming philosophies. A handful of these farms still sell their produce to Whole Foods, but most are long gone from the produce bins, if not yet the walls. That’s because Whole Foods in recent years has adopted the grocery industry’s standard regional distribution system, which makes supporting small farms impractical. Tremendous warehouses buy produce for dozens of stores at a time, which forces them to deal exclusively with [huge] farms. …

“The question is, … just how well does [today’s organic] hold up under close reading and journalistic scrutiny? [Not that well]. At least that’s what I discovered when I traced a few of the items in my Whole Foods cart back to the farms where they were grown. I learned, for example, that some (certainly not all) organic milk comes from factory farms, where thousands of Holsteins that never encounter a blade of grass spend their days confined to a fenced ‘dry lot,’ eating (certified organic) grain and tethered to milking machines three times a day. …

“I also visited Rosie the organic chicken at her farm in Petaluma, which turns out to be more animal factory than farm. She lives in a shed with twenty thousand other Rosies, who, aside from their certified organic feed, live lives little different from that of any other industrial chicken. Ah, but what about the ‘free-range’ lifestyle promised on the label? True, there’s a little door in the shed leading out to a narrow grassy yard. But the free-range story seems a bit of a stretch when you discover that the door remains firmly shut until the birds are at least five or six weeks old–for fear they’ll catch something outside–and the chickens are slaughtered only two weeks later.”

(I really don’t have strong feelings one way or the other; I just thought this was interesting.)

So I hadn’t posted anything about this because there was a (very very slight) chance that things wouldn’t work out, but:

A friend found really cheap tickets from Boston to Moscow, and, since I had told her (as I tell everyone) that anytime she wanted to take a spontaneous international trip I would most likely be up for it, she called me. I was really surprised that Americans could go to Russia without making some kind of extra-special diplomat-level arrangements, but it’s actually rather simple now. We did have to apply for visas (the which necessitated contacting a member of my ex-husband’s family [trauma]), and I wasn’t sure they would come through, but as of Thursday we’re officially going. At this time in two weeks I’ll be in Moscow (!). We’ll only be there a few days, but we have what looks like a pretty good guidebook so we’ll get in some good sights. We also hope to see a Bolshoi ballet or opera (or, better, both).

So, I’ve been teaching myself to read the Russian alphabet. Right now I sound like a little kid sounding out words or Dora from Finding Nemo speaking whale (k-aaaa-k… v-aaaa-s-h-iii… d-y-eeee-lllll-aaaa) but it’s coming relatively quickly. I’m sure my pronunciation is terrible, but at least I’ll be able to read signs.

(in a totally different vein from the Colbert video)

My roommate just showed me this. I am beside myself with awesomeness.

Who loves being Mormon? I do!

I wonder if Mack Wilberg wrote the music…

Hard to say who won that contest…