So the Fourth of July in Boston is, in a word, awesome. If you learn nothing else from this post, learn this.

This was only my third Fourth (heehee) in Boston, since the other years I’ve technically lived in Boston I was in London, Arkansas, Germany, Utah, and Boise. ‘Twas so delightful to stay here this year. On Saturday I met up with friends at the Boston Pops dress rehearsal; it’s FREE (though you have to get there at least 4.5 hours early and wait in the hot hot hot sun [bring games and water]) and it was great fun to sing all those patriotic songs while fireworks went off (in-concert fireworks new this year). I especially had a great time ordering around my good friend TTJ, who is Finnish  (“CLAP, Finn!” “STAND, Finn!” [good thing he has such a great sense of humor]), lest he show insufficient respect for America. And there are always CANNONS during the 1812 Overture. (Yes, cannons. And did I mention REAL CANNONS? I want to fire a cannon. Or be fired from one, as long as there’s a soft landing surface.)

And the Fourth was just as good. The reason for going to the dress rehearsal (besides [slightly] fewer people [though once you get over 500,000, what difference do a few more thousand make?]) is that the fireworks aren’t visible from the concert venue. I again met up with friends including TTJ the Finn to watch the (spectacular, as always) fireworks over the Charles. During the patriotic sing-along I cheerfully fed lyrics machine-gun-style to TTJ, who had a program on Saturday night but not Sunday. “This land is your laaaand [thislandismyland] – this land is myyyy laaaand [fromCaliforniatotheNewYorkisland] – from Califoooorniaaaa…”

After the fireworks we walked with several hundred thousand of our closest friends along the river for a while, watching the stuffed-to-bursting subway cars cross the Longfellow Bridge and folks who were slogging through traffic (lots of people + small space = get comfy sitting there, dude). I finally got home at about 12:45 AM… and I beat everyone else by over an hour. Good thing none of us had to work the next day.

So, reading back through this post, I fear that I have not adequately conveyed the Boston Fourth of July. This may be beyond my capabilities as a writer. I also regret that my camera broke 8 months ago and I haven’t fixed or replaced it, so I have no photographic evidence. I guess you’ll all just have to come see for yourself next year. (That’s a hint.)

So last Sunday I attended the dedication of the new stake center for the Cambridge stake of the Church of Jesus Christ of Latter-day Saints. Take all the negative vibes from Wednesday’s cross-dressing Norman Bates episode (see last post), invert them, then multiply them exponentially and that’s pretty much what it felt like. The music was fantastic – we got to sing “How Firm a Foundation” (verses 1, 2, 4, and 7 – awesomeness) and “The Spirit of God” (another of my all-time faves, henceforth and forever amen and amen);  the choir sang excellent music; a brilliant New England Conservatory student played trumpet descants  (brass in a chapel!)… And the dedicatory prayer itself was beautiful. Angels were there, I tell you. ‘Twas (and ’tis still) an altogether thrilling experience to be part of the history of the Church here. And the Cambridge stake finally has a place to meet, twelve years after its creation.

Update: Now with a picture (was having technical difficulties before)! 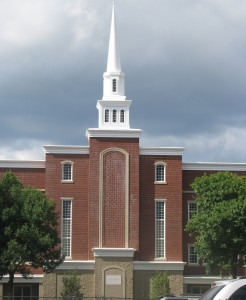 I don’t mean road rage as in just shouting at someone. I mean real, get-out-of-the-car-screaming-obscenities road rage.

Last night someone honked at me as I was driving. To my knowledge I hadn’t done anything, so I honked back. She honked again, more insistently. I flipped her off.  (Yeah, I shouldn’t have done that. But I was driving in Boston.)

That, friends, was the tiny push she needed. The fingernail-digging tenuous grip she had on sanity was broken. Raving mania ensued.

First, she tailgated me with her brights on. Then she pulled up beside me and swerved at me. Then she cut me off and slammed on her brakes so that Simon Bennett’s ABS kicked in and  a collision seemed imminent. And then she stopped so I couldn’t get around her, got out of her car, and came up to me screaming obscenities. (She seemed most miffed that I had dared give her The Finger, as she considered herself by far the superior driver.) I left my windows up. She banged on the window, then got back into her car and drove away.

I was furious (my fight-or-flight response was definitely the former), but also a bit freaked out – this woman’s meds had obviously failed. So, not knowing what else to do, I took down her license plate number with the intention of filing a complaint.

The only problem is that I forgot to note the state.

As I found out this morning after I’d driven all the way back to east Cambridge.

So if anyone has any idea what state would have license plate number 489 J79, registered to a goldish Accord (I think) driven by a female psycho with long brown hair and a potty mouth, feel free to share the info.