Sometimes parachutes get bored, all packed up in an enclosed space.

And jumpsuits (jump-suits) feel neglected just hanging there on a rack.

And experienced skydivers need to make new friends, so they want to take newbies on tandem jumps.

Feeling charitable yesterday morning, I enabled all three to accomplish their missions here on earth. 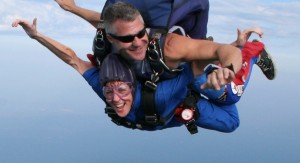 Totally unrelated: This I got from pseudo-slacklining last Saturday: 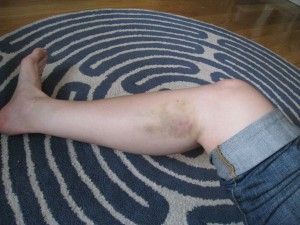 I love having bruises; they make me feel like my life is much more interesting than it actually is. (My last really awesome bruise – it was way awesomer than this one – was, unfortunately, in an un-showable location.)

‘Tis interesting. It turns out that outdoorsy stuff is way fun when I’m relaxed and don’t feel like I should be doing something “more constructive.” And as long as I’ve been getting regular allergy shots.

Q. What problems are common with 2007 MINI Coopers?

I’ve been lucky… But then, I’m also a pretty boring driver these days. I decided to slow down before my luck ran out.

Which almost happened on Wednesday. I took my fantastic Finnish friend TTJ to his driving test so he could get an American license. Simple, yes? Should have taken about 30 minutes.

When we got to the testing site, I flipped a quick U-turn (technically called “banging a U-ey” here)…

Right in front of the test administrators.

Who asked me what my problem was.

(Turns out the U-turn was highly illegal; I had thought they were yelling at me because it originally looked like I was headed the wrong way down a one-way street.)

Then they looked at TTJ, who was standing close by, and asked if we were together.

Oh how I wished I could lie.

Then the test administrator pointed out that one of my brake lights was out, and I had to get that fixed immediately. (Yessir.)

When TTJ finally got to take the test, I remained as silent as possible. I didn’t think that the test administrator would appreciate my ruminations that mid-street U-turns are safer than intersection U-turns (since traffic is only coming from two directions instead of four), and I didn’t want to give him an excuse to fail TTJ, who then might not bring me salmiakki the next time he visits Finland.

When the test was over, seventy-five minutes after TTJ and I arrived at the testing site, the administrator gave me a very stern warning that next time I went to that neighborhood, I better not make any illegal U-turns. I WILL BE FINED.

So I’ll be trying to replenish my level of good driving karma for a while. Just in case.

So I was re-introduced to the concept of fun last weekend – something that myISFJ personality tends to neglect. It all started on Friday night, when I freed Natalie Cole and Ella & Louis and the Squirrel Nut Zippers from the confines of the MP3 player, and continued through a campout that I had been somewhat dreading but genuinely enjoyed.  I spent a lot of time with a close friend and was relieved beyond measure that the overwhelming feelings I had for him for several years have finally passed into platonic affection. I got to discuss travel and cultural differences and trot out a few Finnish phrases. I talked with old friends – several of whom I wasn’t expecting to see – and made some new ones. I wobbled across slacklines (with the aid of ropes) for the Ward Olympics and even laughed about the sunk canoe once I decided to stop being a stick in the mud. A musical performance Saturday night pretty much couldn’t have gone better. I went on my first-ever late-night canoe ride through slowly rising mist on a moonlit lake and saw reflections of stars in the water. We had testimony meeting in an amphitheater facing the lake on a gorgeous Sunday morning. I kissed a tree frog (you never know).

Spending over 36 hours just enjoying other people and beautiful outdoor surroundings, with no obligations, without feeling pressed for time, without feeling that I should be conscientiously working toward self- or world-improvement, has left me both feeling much, much lighter and with a new understanding: That doing things just for fun is just as important as any other task on my to-do list, not only because then I’m much more relaxed and able to accomplish the things on my list (and to prioritize better), but also because then I actually have joy to share with others.

Huh. Seems like there’s a scripture about that somewhere…

Lots of h8’n these days on Islam in general and Muslims in particular. One weblog post I read today cited some truly sickening Facebook comments about changing an epithet describing Muslims from “towel heads” to “sheet heads,” har de har har. Lots of the controversy stems from plans for Cordoba House, a community center (NOT a mosque) in lower Manhattan. As Feisal Abdul Rauf, chairman of the initiative, explains, “Our name, Cordoba, was inspired by the city in Spain where Muslims, Christians and Jews co-existed in the Middle Ages during a period of great cultural enrichment created by Muslims. Our initiative is intended to cultivate understanding among all religions and cultures.”

So why the controversy? Because lots of folks don’t get that the jihadists in Islam are akin to fundamentalist backwoods splinter groups in Christianity, only less mainstream.  Fortunately, some sane voices cry amid the cacophony of astonishing bigotry:

A wonderful post at BYU’s 100 Hour Board explains differences between denominations of Islam, and mentions Timothy McVeigh and the memorials at the Murrah building. It also relates Mormons in Christianity with Sufis in Islam, as far as their acceptance by the mainstream group.

The 100 Hour Board references a blog post at ButNowYouKnow entitled “It’s Not Even an Effing Mosque.” The post describes the planned community center, which will include “a 500-seat auditorium, theater, performing arts center, fitness center, swimming pool, basketball court, childcare area, bookstore, culinary school, art studio, food court, September 11th memorial, and a prayer area.” The writer concludes the description with “Sounds more like a YMCA, to me.” Ja, me too.

And finally, a NYTimes op-ed by Nicholas Kristof  lists groups that Americans once distrusted or reviled – including Catholics, Chinese, Irish, Mormons, Japanese (internment camps, anyone?), and Germans. Did you know that nineteenth-century presidents were in cahoots with the Pope, who wanted to claim parts of America for himself? Me neither. Because they weren’t.

H8rs, go ‘way. Or at least find something sensible to h8, like black olives.

So as I mentioned last week that I’ve been getting lots of messages about acceptance lately. The phrase “kick against the pricks” came to mind one day and I decided to investigate it. I’d always thought of the pricks as being just any painful experience; sometimes crummy things just happen, and it’s useless to fight them. But then I found a much more interesting explanation at biblequestions.org (emphasis mine):

A large percentage of people in the first century were tillers of the soil. Oxen were used to work the soil. The prick or goad was a necessary devise [sic]. The prick was usually a wooden shaft with a pointed spike (prick) at one end. The man working the ox would position the goad in such a way as to exert influence and control over the ox. You see, if the ox refused the command indicated by the farmer, the goad would be used to jab or prick the ox. Sometimes the ox would refuse this incentive by kicking out at the prick. As result, the prick would be driven deeper into the flesh of the rebellious animal. The more the animal rebelled, the more the animal suffered. Hence, the statement to Saul: “It is hard for thee to kick against the pricks.” (Saul was rebelling against God.)

So, the pricks, or goads, are actually things that are supposed to be encouraging me gently forward – not just random spears of misfortune. That makes life a little easier to cope with.

I’ve also been reading the The Innovator’s Dilemma by Clayton Christensen. He describes man’s forays into the world of flight, pointing out that  would-be flyers originally (and unknowingly) fought against natural laws – and failed. Only when they “recognized or harnessed the power of these laws, rather than fighting them” could they “fly to heights and distances that were previously unimaginable” (Introduction, xxii).  I tend to do the modern-day equivalent of fighting natural laws with everything I can muster, and then feeling sad that mean old gravity is picking on me. I feel like I need to accept that gravity is there, first of all, and then learn to work with it instead of against it.

So, fighting = useless at best. Accepting and learning to work with God and the world –> not just feeling less crummy, but finding peace and happiness. Difficult lessons for a high-strung person to learn, but important.