Am finally getting around to writing about November, which was pretty much all-around awesome, travel-wise. I flew out of Boston on October 31 and landed the next day in Stockholm for a friend’s wedding later that week. I stayed in a cute little red cottage in Nynashämn, a tiny island to the southeast of Stockholm, riding the Pendeltåg (commuter rail) back and forth from the city center. I haven’t any particular adventures to report this time; the highlight was spending time with my friend HJG and her tiny tiny tiny baby K (who was born two months premature and was the size of a newborn even though he was technically five months old). I also haven’t any pictures to post this time; my camera was broken.

The day after the wedding my friend OTF and I flew to Germany for the sole purpose of driving really really really fast on the Autobahn, which was pretty much one of the funnest things I’ve ever done. My camera was still broken and OTF’s was later stolen,(1) so I have a very few iPhone pictures of Berlin: 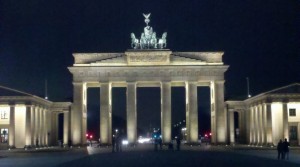 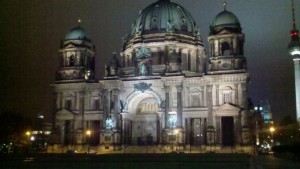 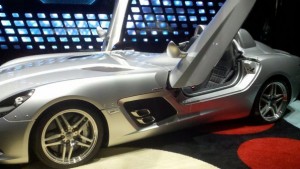 Sweet car, no? OTF and I had been driving a Mercedes, but it sho’ didn’t look like this one. Maybe next time. With this car we could actually break 250 km/h (the fastest we could go in our car was 237 km/h (147 mph), which was still way cool).

So about a week and a half after I returned from Sweden/Germany, this same friend (OTF) and I headed down to Brazil/Argentina/Uruguay for a week and a half. I had gotten my camera fixed by then, but . . . I forgot to charge the battery . . . aaaaaand I forgot my charger. AARGH. Again, OTF’s camera had been stolen previously, so at this point we just have a couple of pictures with my camera and some shots from his iPhone. So here’s Rio: 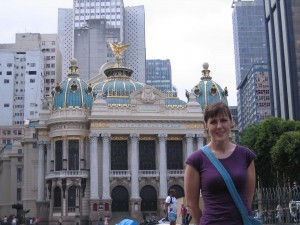 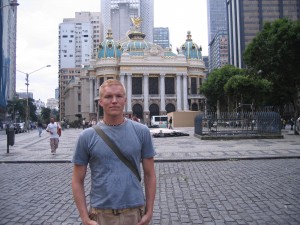 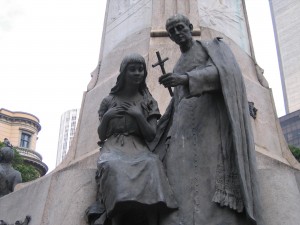 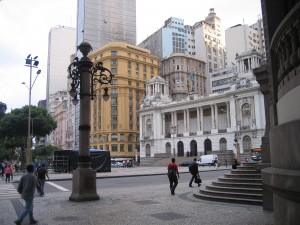 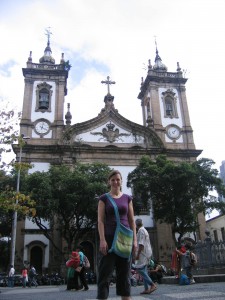 The incredible library (the shelves adorn all four walls, and they really do go up that high): 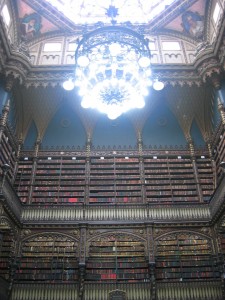 Typical market street, complete with crowds (this was a while after a random mime whom we hadn’t noticed had suddenly grabbed OTF’s behind while shouting loudly, making me shriek and jump halfway to the moon and thus providing entertainment for dozens of very amused bystanders): 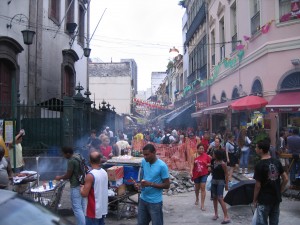 And here we have some apartment buildings (these went on endlessly): 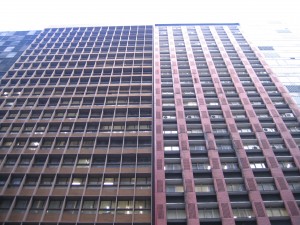 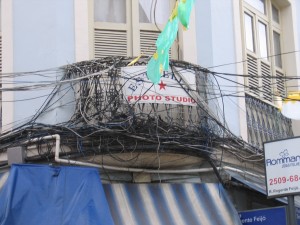 And some food from a corner vendor (it has an actual name which I believe translates to “random [stuff] on a plate”)–look closely and you’ll be able to see beans, rice, noodles, french fries, breaded/fried meat (allegedly beef), lettuce, and tomato: 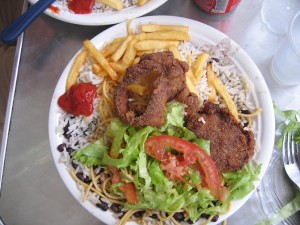 After a couple of days, we flew to Iguazu Falls, which are 2.7 km long and just freaking amazing. I only have a few pictures (I seem to have deleted several of my favorites–aargh). For scale, look on the right edge of the first picture, about 2/3 of the way down. Those tiny little orange things are in fact very large rafts that seat about 25. 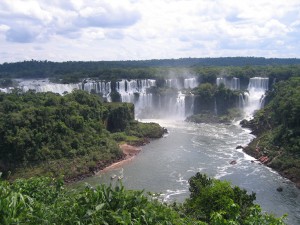 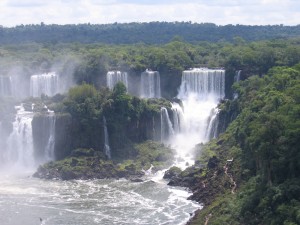 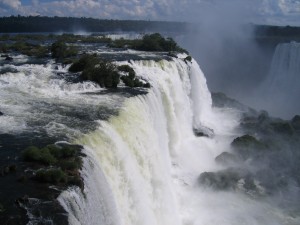 After Iguazu Falls we flew to Buenos Aires, where OTF took some more iPhone pictures but has not yet sent them to me (hint, hint). We then took a ferry and a bus to Montevideo, Uruguay, and spent the night and part of Sunday there before flying back to Rio. (We had to re-book ferry tickets in Buenos Aires after we got to the landing for the first company on Saturday and were told that the ferry wouldn’t be running that day because “the boat broke.” Nobody seemed to think it was any big deal; they just sent us over to a competitor. The companies must be in cahoots.)

Our last day in Rio we went hang gliding, which was IMHO better even than skydiving, because I felt like I was really flying (we got to swoop and everything!). I SO want to do it again. The only mildly scary part is running off the edge of a platform into the nothing:

But it was AWESOME! 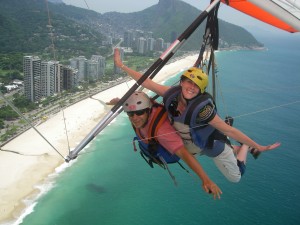 So there are of course way more stories than this, but the intimidating thought of all those stories is part of what has been keeping me from writing about this adventure at all, so, if you want some more stories, you’ll have to ask nicely in the comments. Which I’m sure you’ll be happy to do, right?

(1) We thus have no photographic evidence of how fast we drove, which is a bummer, but also no video evidence of my very loud four-letter reaction when a driver pulled over right in front of me when I was doing 225 km/h, which is probably a good thing.

Think Harder – Starts with an awesome parable about camels and links to a TED talk (and we all know how rad those are).

Lowering Medical Costs by Providing Better Care – I heard this while I was driving and sat in my car until it was over. The top 5% highest costing patients generate 60% of health care costs. Rather than doing damage control after a situation has become a crisis, a doctor in Camden, NJ is working on prevention via guided lifestyle changes. Turns out it costs less to hire someone to check in with a patient once a day or week (to make sure the patient is taking proper medications, etc.) than it does to allow that patient to become so ill that the patient ends up in the ICU for a month at a time. Who knew?

The Chewy: Quite possibly the best chocolate-chip cookies I have ever eaten. Enjoy responsibly.

Aaaaand: three new weblogs that are part of the new LDS digital missionary effort (two friends of mine are leading the initiative here in Cambridge):