So, I love Downton Abbey. Passionately. I count down the days until Sunday each week; by Sunday, I’m counting down hours. I need my cousin Violet fix; I need to see Lady Mary’s exquisite eyebrows; I need the comforting crossness of Mrs. Patmore. I breathe a sigh of contentment after each episode, happy in British television goodness, recharged for the week ahead.

And this was why yesterday’s episodes were so disappointing. Downton Abbey, you can do better than this. The show was unbelievably maudlin and sloppy; it was as if the writers, having created several story lines, suddenly realized that the end of the season was looming and they needed to tie off some loose ends.  Unfortunately, instead of doing that neatly, they overdeveloped some story lines that should never have seen the light of filming and hacked and stapled together others.

Useless story line #1: The Canadian. Wha? And it wasn’t resolved in any kind of satisfying way; ’twas like a cake made without eggs (I’ve eaten part of one before so I know what I’m talking about). (Yes, this was in an earlier episode, but that still matters to this episode, because the writers could have spent time developing other story lines that instead got short shrift.)

Useless story line #2: Lord Grantham and Jane. Again, wha? Or, to quote my verbatim response the first time Lord Grantham laid one on the maid, WHAT THE HELL?!?! It wasn’t just that such a dalliance goes completely against everything we know about Lord Grantham’s character; it was also that the two actors had less than zero chemistry. I got the sense they were both steeling themselves before each interaction, thinking, OK, the script says we kiss here, so I guess I’ve gotta do it. Wholly and entirely awful. The only redeeming quality is that they didn’t actually sleep together.

Useless story line #3: Ethel. I liked her at first (or at least I enjoyed disliking her, pretentious chit that she was), and thought she had a decent story to tell, but she’s long since overstayed her welcome. And the horrid and domineering grandfather added nothing except discomfort.

In addition to having useless story lines, this episode tied nooses around its loose plot lines and then kicked them unceremoniously off the gallows.  No graceful deaths allowed, apparently.

Noose #1: Matthew’s recovery. I know someone who recently had knee surgery. After being off ONE of her legs for just a few weeks, she can do almost nothing with it. (This is a girl who has run multiple marathons.) She certainly can’t stand on it, even if she’s also standing on her other leg. And we’re supposed to believe that Matthew, who had been wheelchair-bound for months, suddenly finds himself standing–like, WHOA, dude!–because Lavinia drops a tray? No, no, no. This story line should have been developed more; much more believable–and satisfying–would have been watching Matthew struggle nobly to gain strength, first standing on shaking legs and gradually learning to walk. I do like the way the writers covered the doctor’s mistake, though; that was believable.

Noose #2: Lavinia. OK, maybe the Spanish flu carried off its victims quickly, and maybe Lavinia did lose the will to live after seeing Matthew and Mary (whether a more believable reaction would have been hurt anger rather than instant despairing resignation is another question [is Lavinia really this incredibly good?]), but still–seeing her go from upright walking to death a few minutes or even hours later, but seeing nothing between, strains credulity. And Cora did a much better job portraying illness and discomfort in her non-death scene than Lavinia did when she met her tragic end. That she died holding Matthew’s hand is just the tacky ostrich feather in a hat Violet wouldn’t be caught dead wearing.

Then there were the general suckinesses–things that didn’t need to be seen, or could have been better.

General suckiness #1: Mr. and Mrs. Bates in their nuptial bed. Sure the sheets covered everything up to the shoulders, but did I really need to see Mr. Bates’s flabby upper arm? (Hint: NO.) (CANNOT UNSEE.) The position the two were in and the tidy arrangement of the sheets also bugged me; these two have been waiting years to get it on, people. They were entirely too calm. They might have been discussing silverware.

General suckiness #2: Cousin Isabel’s face at Lavinia’s deathbed. Actually, I don’t know if this counts as a suckiness, because it made me laugh. I don’t know that I’ve seen such over-the-top ridiculousness from an English person since Rowan Atkinson (whose Mr. Bean never fails to delight). I still collapse into giggles when I picture it in my head. I wonder if Isabel had prosthetic eyeballs; I don’t think they could have stood out more than her real ones.

General suckiness #3: Zombie Matthew. It wasn’t his acting–I think he did an OK job of portraying guilt-riddled despondency–but who was in charge of the makeup, and did they have to layer it on an inch thick? The vampires in Twilight were Oompa Loompas in comparison, and the black under Matthew’s eyes wouldn’t have been out of place on a football player. (Then, at the funeral, Matthew turns into a vampire–only without the Twilight sparklies.)

There were good parts too. Sir Richard remained deliciously scurrilous, trying to bribe Anna to spy on Mary and then sidling his way back into Downton Abbey after the flu hit. (Too bad the flu didn’t carry him off; I hope against hope that Mary doesn’t actually marry him.) Sybil and Branson did a great job–I loved the way they stood up for their principles without being completely overbearing–and I enjoyed Lord Grantham’s response to their unwelcome announcement, though I did think he was a bit over-congenial at the end. I would expect him to be forgiving but in a grudging way for a while longer.

And Thomas. Finally he gets a chance to not be utterly detestable. I felt genuinely sorry for him when he found out he had been so thoroughly cheated, and his reaction was perfect. O’Brien, too, finally seems sympathetic. Guilt + poverty = win.

And Violet. Wonderful, wonderful Violet. “Don’t be defeatist, dear, it’s very middle class.” “I do hope I’m interrupting something.” “I was watching her the other night, when you spoke of your wedding. She looked like Juliet on awakening in the tomb.” Her lines are as perfect as her hats.

So there’s just one episode left, and from the previews it looks like someone finally at least tries to give Sir Richard what’s coming to him. This is promising. I’ll be watching, Downton Abbey. Don’t turn yourself into a soap opera again.

Many moons ago, when I was a lass of 15, I saw a documentary about Pompeii and decided I wanted to become an archaeologist. I loved the idea that I could at least partially reconstruct the life of a human just by looking at bones. Unfortunately for that dream, I soon discovered that archaeologists have to do, like, sciencey stuff (and probably math too [the horror!]). But the fascination with Pompeii and Herculaneum has lingered.

So I was thrilled when I found that Boston’s Museum of Science was featuring a Pompeii exhibit. Me being me I didn’t get my act together until yesterday (the exhibit ends Sunday), but I’m so glad I did. And even happier that the exhibit permitted non-flash photography.

I loved the bright colors in the frescoes: 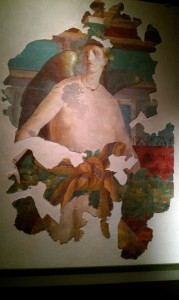 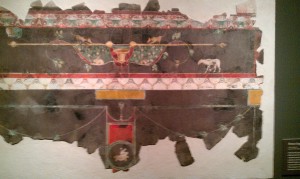 The small sculptural artifacts were amazingly detailed (both these sculptures were probably a foot tall): 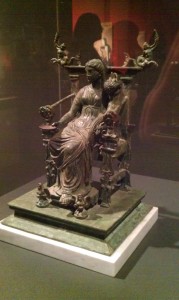 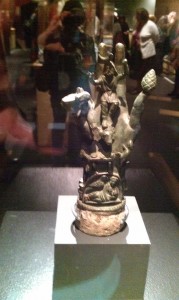 How would you like to get to wear this (complete with currently missing somewhat garish plumage)? (Un)fortunately for you, only gladiators received this honor: 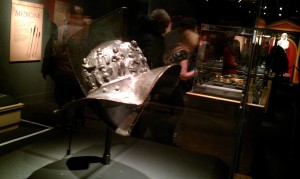 The exhibit included a life-size photograph of Pompeii’s excavated/reconstructed main street as it looks today: 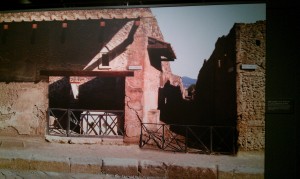 I was surprised but charmed to find that vandalism is by no means a modern invention; the idea of a teenager chipping “Marcus loves Julia” into a wall makes that long-ago civilization feel less remote. Because images are silent, I always think that those civilizations were as well–or at least more stone-faced and stoic than ours. Turns out people had feelings and quirks back then too.

Click the pictures to increase their size and read the (admittedly blurry; hey, I was using my phone) text. 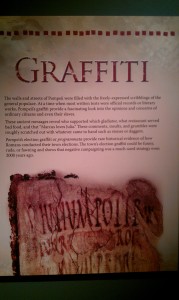 (One surprisingly prominent aspect of life in Pompeii I won’t be discussing here, because my grandmother reads this. Suffice it to say that sexual mores at that time were rather different from those of today. I suppose that when you wear clothes that have been bleached with human urine you have to find some way to enjoy yourself.)

But of course, the most intriguing–and haunting–items on display were the body casts. 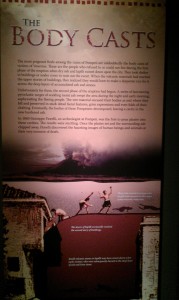 The stories that went with the casts were fascinating: 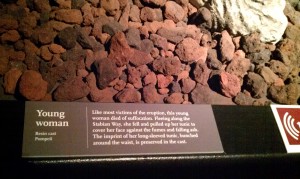 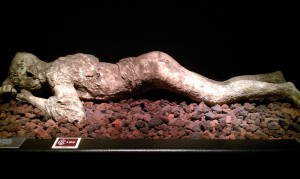 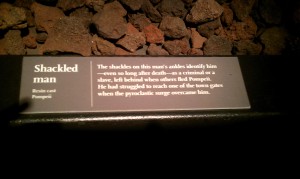 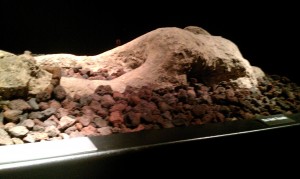 In Herculaneum, another victim of Vesuvius, no body casts were possible. A pyroclastic surge of hot air and ash, traveling at up to 500 mph at a temperature of possibly 1500°F (though the Discovery Channel estimates it was only [only!] 900°F), incinerated all organic material instantly, leaving only skeletons: 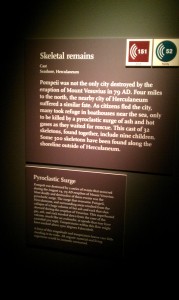 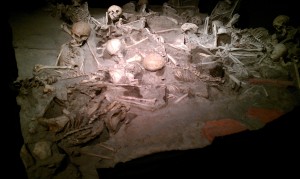 The exhibit also included a four-minute video that showed a simulation of what would have been happening at various times during the day—from 8:00 a.m., when the sky was cerulean blue and the small plume of smoke rising from Vesuvius looked more decorative than menacing; through the afternoon, when the air was filled with smoke and ash, debris fell from the sky, and basically everything that could burn caught fire; and eventually to the early hours of the next morning, when a final (?) pyroclastic surge killed Pompeii’s remaining inhabitants instantly. (I was relieved to read that, according to the Discovery Channel, they died of instantaneous thermal shock rather than slow suffocation.) The simulation showed a huge cloud of smoke and ash racing toward the “camera,” suddenly overtaking it and causing the screen to go black. It was very moving.

I can’t show the video here, obviously, but the exhibit did include this artist’s rendering of what the day may have looked like, though it doesn’t show the debris falling from the sky like superheated hail: 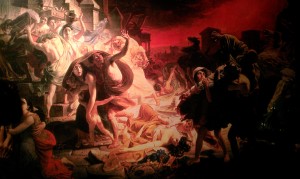 I cannot imagine how terror-struck I would be; I’m sure that it seemed that the world was ending. Scenes like this are only supposed to happen in bad horror movies.

The exhibit ended with a “volcanoes today” section, showing pictures of devastation wrought by relatively recent volcanic eruptions and of volcanoes set to erupt anytime (including Mt. Rainier, whose figurative shadow I lived in for a while, and whose figurative shadow still darkens the abode of some of my favorite relatives [shout-out to the Ninjabread Men!]). I left feeling a sense of awe that nature is as powerful as it is; my myopic worldview tends to focus on, well, my myopic view of my tiny world. I see how much effort it takes to move a relatively small mound of earth with great big machines; I’m amazed when a machine generates 90 mph of wind in a 10-foot-in-diameter column so I can go indoor skydiving. A force that has enough power to blow tons (!) of rock 19 miles (!) into the sky? Unfathomable.