So just over a week ago I completed a sprint triathlon with a few girlfriends: 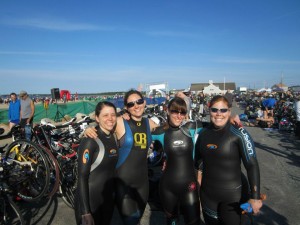 To answer your (very good) questions:

No, I’m not an athlete. I’m not even athlet-ic. Never have been.

No, I can’t really swim. The extent of my aquatic prowess is that I most likely won’t drown (in calm water). My glorified dog-paddle isn’t even glorified.

No, I’m not into competitions (unless I know I’ll win [which pretty much excludes every contest except those related to words, literature, and Scandinavian Christmas carols]).

No, I don’t have a fancy road bike. Or even a non-fancy road bike. I own (and love) a 1971 Raleigh Roadster, which has three gears that sometimes shift correctly and is a great cruiser for around-town riding in pancake-flat terrain: 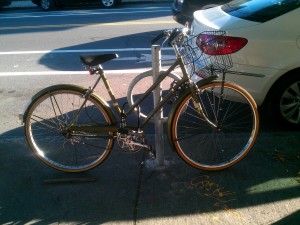 What it lacks in speed, smooth ride, pedaling ease, and lightweight durability it makes up for in… well… um… fenders and a chain guard count for something, right? And, as I found out on Memorial Day, it actually rides pretty well when the back tire isn’t, like, almost completely flat.

So one wouldn’t think that a triathlon would be all that appealing. HOWEVER:

One of my favorite people told me about it (see top picture, right-most person).

A sprint triathlon is blessèdly short (1/4-mile swim, 10-mile bike ride, and 3 1/2-mile run), so I could do it without having to, like, train (heaven forbid I do something that requires preparation/effort beforehand).

Some of my favorite people were doing it (see top picture), and I wanted some girlfriend time. Girlfriend time that includes an adventure in Cape Cod? Even better.

And, most of all: I wanted to do something I normally wouldn’t do.

I’m not sure whence cometh this desire to do something I normally wouldn’t do; heaven knows that the past couple of years have featured character-building opportunities aplenty. (Was it March when I called my mom and cried so hard I could hardly talk for over an hour? Why yes, it was.) But apparently some part of me is concerned that I’m not expanding my horizons enough. Or–maybe I’m sensing that my horizons are much more expansive than I ever thought possible, and I want to see if that’s actually true.

I think the latter may be the more accurate assumption. For a long time after college I would look back at those years and think of all the awesome experiences I could have had then, had I realized those things were possible for me. (I generally thought that good things were for other people–the Winners, if you will–a thought line that still plagues me occasionally.) And for the last couple of decades I’ve felt limited by a lot of vague terrors that I never stopped to define and that, it turns out, are completely invalid.

The lifting of many of these fears means that I’m in a rather fluid state at present. Work is in flux; my main contract ended recently, but I have enough going on to maintain the financial status quo. I was quite busy with various shtuff for a while, but now I’m finding myself with extra time. Time to start learning something new, or improve something I’ve already started. The thing is, with so many options (swing dancing! choirs! swimming! scripture study!), I’m not quite sure where to go next–and I feel a measure of responsibility to Use My Time Wisely.

So apparently I’ve started with a triathlon. It was an enjoyable experience, somewhat to my surprise; the weather was fantastic, the exercise was invigorating, my ultra-slow but character-laden bike received a few backhanded compliments, and the company was delightful. Even getting up early wasn’t too bad. I’m not entirely sure I’ll do one again–not unless I get a LOT better at swimming–but who knows? There can be a second time for almost everything.