So I wrote recently that I’m going to Guatemala for a few months, but I don’t like that post, so I’m pretending it doesn’t exist and will give more specifics here. (Lots more specifics, it turns out. But I cut it from 900+ words to exactly 600. You’re welcome.)

Right after girls’ camp in July, I got a very strong impression—not that I needed to do something, but that I would do something. You are going to Guatemala for the fall to improve your Spanish. I think I stopped, head tilted, considered it for a few seconds, and then thought, “Oh! OK then.”

Why Spanish? Well, I’ve spoken sort-of-decent Spanish since college, but I’ve never made the relatively small effort required to become fluent. The truth is I never really wanted to learn Spanish. I took it in college because I could start in Spanish 102 instead of 101. However, I felt some hesitation; I’ve long been a Europhile, and Spanish wasn’t going to lead me to Europe. (Yes, Spain is in Europe. For some reason that didn’t count. It turns out that by “Europe” I meant “Sweden” or “Germany.”) So after Spanish 202 I let the language fade, even though it would have useful countless times.

So why now, and why Guatemala? Mostly because the impression came and I’m going with it. I’m excited to finally (finally!) learn another language fluently, something I’ve craved for decades (though apparently not enough to actually, like, do anything about it), and it will be useful—my stake has three Spanish branches. Timing-wise, it’s easy to find a subletter in the fall, and I’m only working part-time at the moment. As for Guatemala, not all of it is hot and humid (read: intolerable): Quetzaltenango (or Xela [Shay-la], which is less fun to say), in the western highlands, is temperate. Additionally, several friends have strong ties to Quetzaltenango, which is known for its Spanish schools. I’ll be studying 1:1 with a tutor for 4-5 hours a day, going on afternoon and weekend activities/excursions, and staying with a Guatemalan family, all for less than Cambridge rent.

I leave in 14 days (!!). It’s a little stressful (understatement)—previously when I’ve skipped country for a few months I’ve had more lead time, and England and Germany required less preparation. I’ve bought plane tickets, researched 25 schools, registered with one, studied ways to overcome digestive maladies (ugh), ordered massive quantities of prescriptions, procured a slightly battered-looking suitcase (dilapidated = unappealing to bandits), and finally vanquished that damn stack o’papers on my desk. I’m studying verbs while I run and occasionally translating my thoughts into Spanish (which, given my limited vocabulary, is a multi-lingual game of Taboo). I’m eating my remaining food—even the who-knows-how-old Brussels sprouts—and sorting clothes by utility (the rabid minimalist in me is TOTALLY psyched about living on almost nuthin’ for four months). I’ve found a subletter, the search for which led to a Truly Fantastic Experience (stay tuned), and I’m researching further trips—Tikal, Lake Atitlán, Honduras-El Salvador-Belize-Mexico. I made sure my insurance company covers life-flights (note: I am not expecting to require one) and called a consulate to ensure Immigration won’t deport me if I can’t prove I plan to leave within 90 days.

One drawback is that sleeping has become a bit difficult; even Victor Hugo deconstructing convents in excruciating, narrative-suffocating detail for 44 pages (SRSLY!) isn’t entirely effective. But at this time two weeks from now, after 15+ hours in transit (four on a bus), I’ll be at home with my Guatemalan host family.

I do not usually get into fights on Facebook. For one thing, I don’t feel strongly enough, or feel I know enough, about most issues to make it worth the emotional investment it will undoubtedly require (I’m a sensitive type). Plus, I think that public Facebook brawls are the epitome of unclassy. However, today I made an exception.

A friend of mine posted the following on her wall: 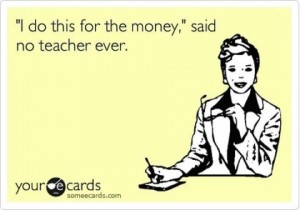 True, right? I think pretty much all civilized people agree that teachers are ludicrously underpaid and undervalued in our society.

But “pretty much” =/= “all.” Note the following exchange between my friend and a friend of hers: 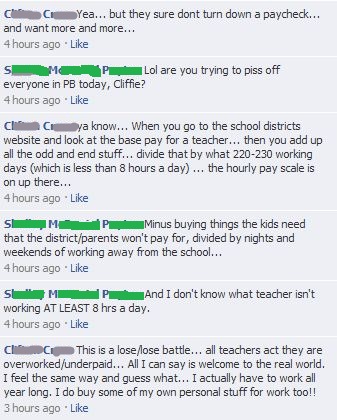 Now, I know that this was between my friend and a friend of hers–technically none of my business. Even if it were my business, as a friend of mine reminds me, I don’t have to go to every fight I’m invited to. Also, again, I think Facebook fights are tacky, and in my real life I strongly dislike conflict.

On the other hand, I didn’t think it was right to let someone get away with saying that (yeah, I know, look at me, administering Universal Justice According to Fishies). Also, I know, and am related to, too many teachers. Thus the following.

(Note: I should not have attacked this individual personally. That was way unclassy of me.) 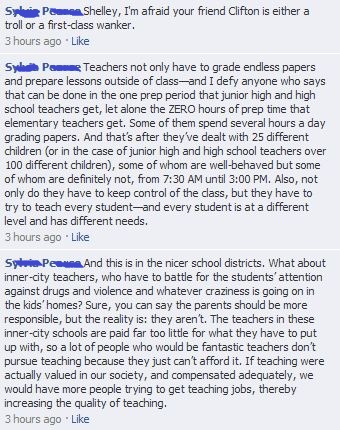 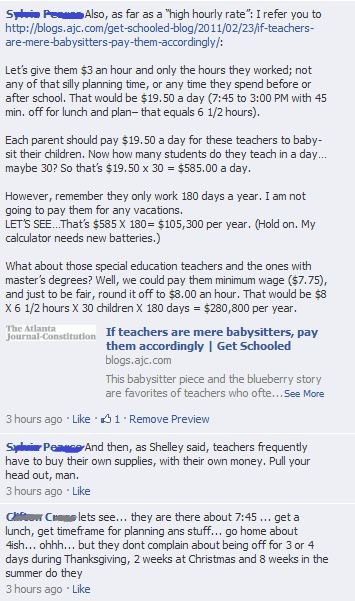 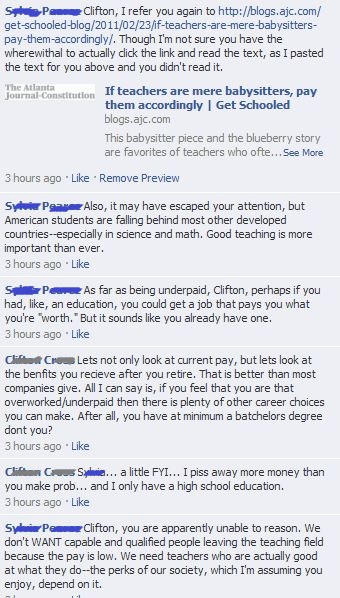 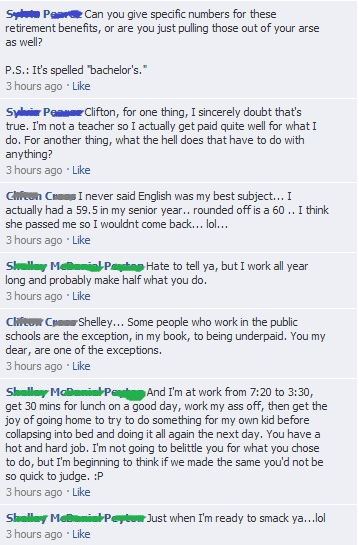 By the time I wrote my last above, I was so angry I was shaking. If everyone valued education as little as this gun-toting mouth breather does, for one thing, the technology to invent the weapons (or cell phones, or pickup trucks) he loves would never have been invented. Also, I’m assuming (perhaps erroneously, but I’m still pretty mad) that this guy is one of those right-wing chest beaters who say “America is the greatest nation in the world!” without thinking about whether that statement is actually valid (and, if so, in which contexts)–and who don’t realize that one reason the U.S. has done so well is that the people are, like, educated. People like this individual take advantage of the benefits this country has to offer without contributing anything that will even help maintain the status quo, let alone make anything better for anyone who isn’t him (or her). He also doesn’t realize that if education in the U.S. doesn’t get better fast, America won’t be the “greatest nation in the world” by any standard–or that if more people were like him, it already wouldn’t be.