So this will mostly be a picture post recounting a few highlights of the past couple of months. I bought a few Groupons back in the spring and, of course, procrastinated the day of their redemption until it was almost everlastingly too late. Fortunately I realized this just in time and managed to schedule several of them for August/September.

For the first I only have one picture: 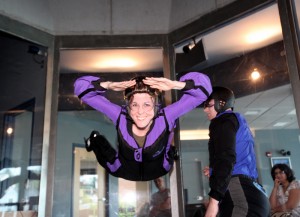 In case what I’m doing isn’t immediately obvious, I’m skydiving. Inside. (Outside skydiving is also fun, but I haven’t seen a Groupon for it yet this year. If I do, I’ll definitely go again.) It was cool to experience the power of 90-mph winds about 18 hours before Hurricane Irene was due to slam into us; I hadn’t had a reference for what really strong winds can do. I went home and moved the grill, all the trash cans, and everything else that could have been used as a projectile into the basement, just in case. (As it turned out, Irene was just a tropical storm when she blew into Boston, and we just got some wind and rain where I am. Our power didn’t even flicker. But I’m OK with that.)

Irene was kind enough to sweep all clouds out of the area as she left, so when I went for a sunset hot air balloon ride two days later, the weather was just plain beautiful.

(See the blue sky behind the balloon? I was IN that.)

I personally thought that a “splash and dash” (the technical term for letting the balloon basket hit the water before rising again) would have been wicked awesome, but the owner explained that the basket wouldn’t have time to dry out. So we had to be content with staying about three inches above the lake. Bummer.

A week and a half later, the sky above New Hampshire was again an incredible cerulean blue as my friend E?S and I set off into the wild blue yonder above Lake Winnipesaukee (wih-nih-puh-SAW-kee) in a gorgeous biplane (!!). The plane was built in 1991 using 1930s-style materials (yes, that propeller is made of wood). 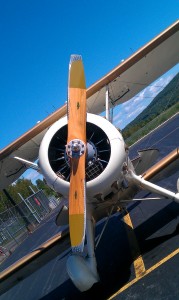 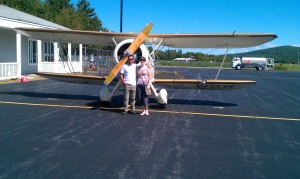 The last aeronautical adventure took place yesterday, when I (kind of) got to help fly the smallest helicopter you’ve ever seen: 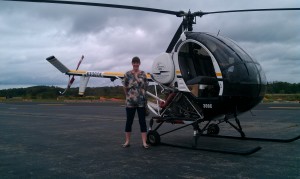 It’s basically an escape pod with a couple of propellers and a tail. Notice that there is no door. This was true during the flight as well, which was a little disconcerting at first. 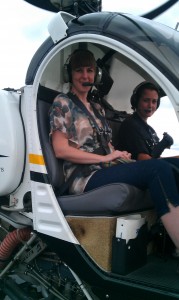 I just got to move the cyclic (think of it as the “joystick”–what makes the helicopter go up, down, left, or right) a bit. I wasn’t very good at first and kept accidentally pointing the helicopter at the clouds, but I got the hang of it. We flew over Gillette Stadium, which will soon be filled with fans of the New England Patriots: 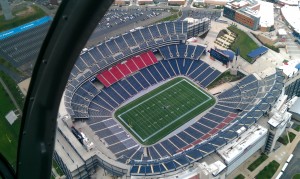 I admitted to the pilot that I don’t know anything about football, and she was amazed–especially since I’m from the South. It’s true. I honestly have no idea what happens (or is supposed to) in most of the game. Touchdowns are good, as are extra points, and sometimes a team can score something that gives them just 3 points instead of 6. Beyond that I know nothing (please don’t try to enlighten me; on this subject I remain contentedly benighted).

Despite the clouds, it was a lovely day to fly over the lakes and forests south of Boston: 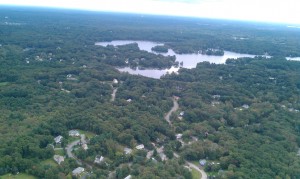 This was my last aviation-related Groupon; I went on a Groupon fast back in the spring, when I’d already bought a whole bunch of them and knew I wouldn’t have time to redeem any more. So my posts for the next while may be boring. In which case, my imaginary readers can peruse my weblog as a cure for insomnia…

One thought on “Fishies in the sky with cubic zirconia”