So I spent last week with 16 of the awesomest 13-year-old girls EVAH at girls’ camp. One might legitimately wonder whether this was an adventure fraught with risk; after all, my skill set (writing, classical musicianing, remembering random details from bygone decades, reveling in air conditioning, organizing inanimate objects, slaughtering the competition at literature games and Bananagrams), maladroit set (meeting new people, dealing with large groups, getting up early, tolerating heat and humidity or insects, coming across as any kind of authority figure, functioning a-tall during periods of sleep deprivation), and novitiate set (working with teenagers, anything involving the Great Outdoors™) seem remarkably ill-suited to such an endeavor. Thus it was with no small degree of trepidation that I set out last Tuesday for New Hampshire with two teenage girls and all our stuff crammed into Simon Bennett. Fortunately, all the other counselors/staff at the camp either currently have or have had teenagers, either currently work or have worked in middle or high schools, recently attended girls’ camp themselves, and/or are in the same ward as some of the campers; they were immeasurably helpful.

And we had a blast.

The girls were fantastic—our group had none of the drama and intrigue and disciplinary problems that other groups had. They didn’t complain about getting up early or hiking in the heat or scrubbing the bathrooms or having to clean up TP after someone pranked us: 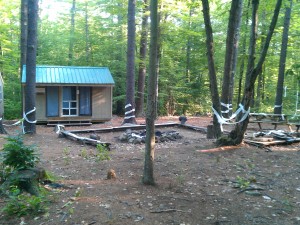 Some of them asked me somewhat incredulously if I’m really older than 22 (most blessèd are they). All the girls—the shy ones and the diametrical-opposite-of-shy ones— actively participated in scripture study discussions and got along swimmingly. Several gave us chocolate, and one made us earrings: 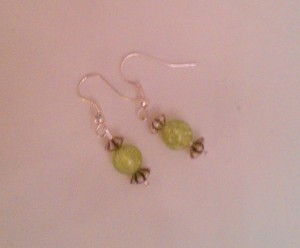 Additionally, the three that I drove to the trail head for our hike fully appreciated the absolute synergistic joy of loud Finnish Christmas polka music* + Simon Bennett (WIN!) (everybody else makes fun of me). I wish I could post pictures of their adorableness; you’ll just have trust me when I say they’re all ZOMG SO CUTE!!!!!!

As for me, I became slightly less of a pop culture reject (I can now sing the chorus of “Call Me Maybe” as well as a few other current songs), and found that I have, to my complete and total astonishment, absolutely MAD hula hoop skillz. (There is a video. You will not see it.) I experienced a prodigious amount of junk food, insects, and screaming (teenage girls’ default emotional expression); I went swimming and canoeing and kayaking in the lake; my canoe was most cruelly SABOTAGED during the counselors’ race (side note: swimming with one arm while dragging a mostly submerged canoe back to shore = tedious). I got insect bites on my face (in the *#&% middle of the *#&% night—I had to *#&% get up and find the *#&% bug spray), the sole of one foot (grrr), and too many other places to count (no pictures). I got my hair did twice: 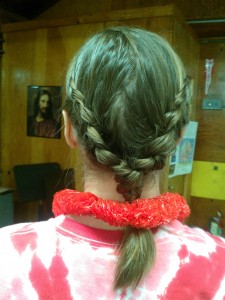 (’Tis an unwritten rule of adolescent girlhood that where several teenage girls gather for any reason, there is braiding in the midst of them.)

and scored a reasonably impressive bruise: 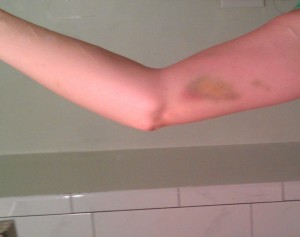 I even felt non-grimy a couple of times—for approximately 30 blissful post-shower seconds before reapplying insect repellent. And—possibly best of all—I ate good food that I did not have to procure or prepare in any fashion. (In my real life, I mostly survive on glorified hors d’oeuvres and comestibles that require, at most, peeling.)

So it was great. Thus the Summer of New (and Not Necessarily Comfortable) Experiences continues. I hope to do more things like this one—the kind that are actually fun while they’re happening, rather than being fodder for good stories after the fact.

*Or, if you prefer, the hard rock version. Faster = more fun to sing along.

One thought on “Fishies Goes to Camp”