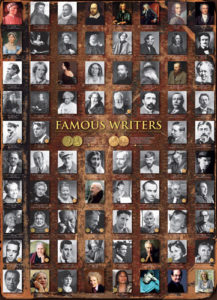 At work, we do a lot of jigsaw puzzles. Like, a LOT of them. One that I brought in (pictured at left) featured some of the world’s best writers, and included indications if the writer had won a Pulitzer Prize for fiction, a Nobel Prize in literature, or both. Doing the puzzle made me think about reading award-winning literature. When I discovered that the first Pulitzer Prize for fiction was awarded in 1918, I decided to read all of the fiction Pulitzer Prize winners—in a completely non-systematic way, because even I’m not ridiculously rigid all the time.

It’s been really interesting. People as a whole don’t change much, though fortunately racism isn’t as blatant as it was in, say, 1942 (Ellen Glasgow’s In This Our Life was the winner that year). A lot of these books are harrowing at times, and I’m still processing The Underground Railroad by Colson Whitehead, which I finished last night. That book required some extra suspension of disbelief so it wasn’t as effective as it could have been.

To alleviate the occasional harrowedness, I’ve started watching the new Queer Eye. The few episodes I’ve seen of the old show were always fun. The Netflix reboot, however, is giving me big ol’ gut punches every episode. The Fab 5 aren’t just making over a few frumpy dudes to help them get chicks—they’re focused on helping their charges find and become comfortable with vulnerability; the makeover recipients, however reluctantly, face the way(s) in which they’re hindering their own progress. Each episode has at least one tear-jerker moment, and the third one, in which Karamo (who is black in addition to being gay) has a frank conversation with a white ex-Marine cop from Georgia, and Cory (the aforementioned white ex-Marine cop from Georgia) shows his mother the quilt that the Fab 5 has made out of his late father’s shirts? Actual crying, y’all. In the words of the 2007 McDonald’s ad campaign, I’m lovin’ it.

All this reading of Great Literature and watching of surprisingly poignant (can’t believe I just used that word; I normally hate it) and even inspiring television, plus a couple of other things, has got me thinking. What would a Fab 5 team have to say about my life and how it’s arranged? And what can I do about that?