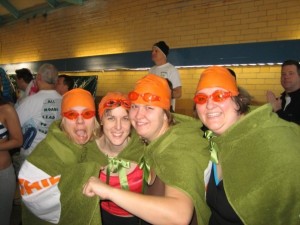 See all that white stuff on the beach? That ain’t frosting, my friends. 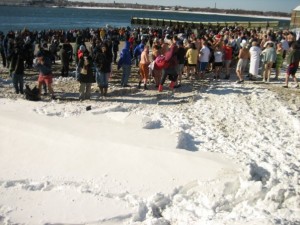 In addition to enjoying the frigid waters of the Atlantic in January, I began frequenting the Finnish sauna here in the Boston area about three and a half years ago, having an especially good time when the water was really starting to get cold in late October (the sauna is only open part of the year). So when the sauna announced that it would be open for one day in February, I was thrilled and delighted and looked forward with great anticipation to the opportunity to immerse myself once again in water only a few degrees above freezing. I thought it would be pretty freaking cool.

A whole bunch of us went and we made sure to document the experience – it’s always nice to have visual proof to reinforce one’s bragging rights. Here are all of us girls on the ice: 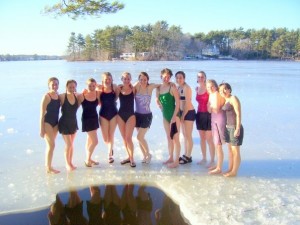 And me, after my first dunk (notice that my hair is soaking wet, because I went ALL the way under): 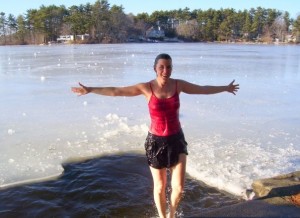 And the girls plus the guys – here I am standing between my favorite Finns: 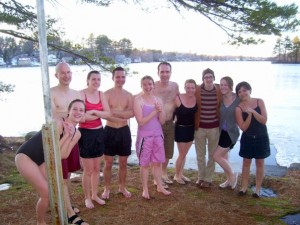 The sauna was open again last weekend, so we made another trip. Unfortunately the lake was no longer covered in ice, but the water was still deliciously and breathtakingly cold. I really wish I lived next to a lake so I could do this at will all winter. Someday, maybe.

2 thoughts on “Love that icy water”